Well, they say that a picture is worth a thousand words, so perhaps I can save us all a lot of time and effort by displaying an illustration of my Everyone Wins Peace Plan in relation to the other famous peace plan ideas out there.

Just click on the image below to enhance the size and once you do, it is formatted to print in landscape orientation, so you'll have to select landscape before printing to get the whole image on a single sheet of paper. 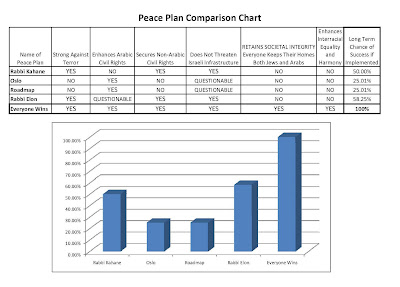 Explanation of the Questionable remarks
1) Rabbi Elon's Plan depends on the Kingdom of Jordan to enhance those civil rights, so it's a question mark whether that is an improvement or not. It can be argued either way, which may not be a good sign.
2) The Oslo Accords and the Roadmap to Peace depend on a cessation of further conflict which sadly those plans do not guarantee, merely a separation, a permanent segregation of peoples is guaranteed. That does not ensure the ability to, for example, to build a new road in Israel next to a strategic kind of hill that would be given to the Arabs. If security right at the border is not guaranteed, how peaceful is such a plan?

I took six of the most essential aspects contributing towards the long term viability of true peace in the Middle East and showed that only Everyone Wins is a sure path to peace.

If these score were grades in a school. All other plans except the Elon plan would fail. With the Israeli Initiative/Rabbi Elon plan getting a "D" at best. The Oslo Accords and the Roadmap to Peace have pathetic levels of long term viability, significantly lower than even Rabbi Kahane's peace plan which Israelis rejected a couple decades ago as even being an option. The Kahane plan breaks even at the 50 percent level of long term viability, in my estimation.

Of these plans mentioned it would seem that only Everyone Wins is a sure plan and path to peace.

May it soon be so, by the grace of God.
Posted by Prof. Alan Friedlander at 2:06 PM