B'Ezras HaShem Yisborach, by the grace of God, in today's post I've updated the popular Jerusalem Defender peace plan comparison chart to include my assessment of the Caroline Glick peace plan. There are now a total of eight other proposed peace plans that are included in this latest version of the chart, all compared using the same six criteria that I have evaluated my Everyone Wins Peace Plan through.

Caroline Glick's proposed plan is very wise in several areas. It is unilateral and does not depend on bilateral negotiations with arch terrorists and their supporters. It also does not propose to ignore Scriptural "intel" that forewarns the world that Israel is going to have Judean and Samarian ("West Bank") territories no matter what people try to negotiate away, so it prevents running down a diplomatic path that would be doomed to fail from the start. It further does not destroy current societal configurations as most other peace plan suggestions of the past would. Most importantly, it ends the possibility of those territories being used as staging ground for a war against Israel. This is a plan that actually has a chance to work.

The main issues I have with Caroline Glick's proposed plan are that it does not, to my knowledge, demand that current criminals are filtered before given an option to naturalize into Israeli society, and it seems to kick the can of the entire Gaza Strip issue down the road.

I believe that you have to filter out terrorists if you are going to naturalize the Palestinian Arabs. You can't naturalize terrorists. As I wrote before,  "The beginning of peace does not come by the placation of terror; that is it's anathema."

I am also for a more decisive conclusion to the conflict with the Palestinian Arabs that does not allow for war over this issue ever again. As long as Gaza is still out there, what do you think a Hamastan would desire a few years down the road? Not trade and peace, that's for sure. If Fatah could not be trusted for peace, how can you possibly hope to trust Hamas? It seems as if this part of the plan is a manufactured vehicle to avoid naturalizing the Arabs of Gaza, not an actual solution based on a consistent policy. If policy accurately emanates from truly noble principles, consistency should rarely be a problem. We do not need to rely on such a conveniency as this.

The process of naturalization, I feel, must be as methodical as necessary to not risk Israeli electoral balance or anything else. Using the slow nature of bureaucracy to everyone's benefit, we can reduce dangerous mistakes that could cost bundles of cash, or even lives. Trying to fix it all overnight is not as good as selecting the correct path as soon as possible, but then taking the time to implement it as wisely as possible.

The Glick plan proposes to save the Arabs of Judea and Samaria from despotic leaders, but abandon their cousins in Gaza to that very fate. It calls for increasing the Arabic voting ratio within "Green Line" Israel, giving them more votes than today, but my Everyone Wins plan calls for maintaining current voting ratio levels in the State of Israel. 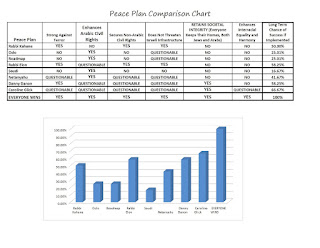 A Summary of the "Everyone Wins" Peace Plan can be found at theses URLs:


Links to previous editions of this chart: